The following are various non-profit organizations that we support.

Click on the logos, images and green text below to visit our recommended resources.

The California Department of Fish and Wildlife (CDFW) has launched a pilot program that makes it easier for the public to report wildlife and pollution crimes with their cell phones. 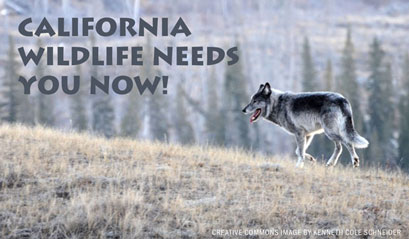 Your voice is needed to compel the California Fish and Game Commission (Commission) to comply with state law regarding trapping fees and to help protect wolves in California from night-hunting and indiscriminate traps!

The U.S. Senate is again considering a twice-failed giveaway to trophy hunters and other special interests that would: a) keep the EPA from doing its job by regulating lead, b) open the door for the importation of sport-hunted polar bears, c) require federal agencies to open up millions of acres of public lands to hunting and trapping, and d) direct land managers to build or expand shooting ranges on public lands, which would increase lead in the landscape.

Ask your Senators to oppose the Bipartisan Sportsmen's Act of 2015 and any related bills.

We are a community of neighbors and other dedicated folks united to protect Outlet Creek and it’s fragile environment from industrial pollution. We seek to maintain and improve the creek and its watershed as a viable habitat for riparian wildlife AND to protect the health of the area’s human residents. Outlet Creek is located in Mendocino County, California and begins its twenty plus mile journey in the north end of Little Lake Valley near the town of Willits.

What Do You Know About Wildlife Crossings?
Take the Quiz