As you know, Project Coyote has been working hard to expose the veil of secrecy that USDA Wildlife Services hides behind to keep the American public in the dark about its brutal treatment of the nation’s wildlife. It’s no wonder that the agency hides its dirty deeds from taxpayers who foot the bill – of over $100 million each year – to kill more than 3 million animals annually, largely at the bidding of ranchers and agribusiness. Project Coyote Science Advisory Board Member Dr. Adrian Treves and colleagues recently published a research review, which demonstrates that state and federal agencies are relying on poorly designed research and bad science to justify their use of lethal predator control programs (see our news release about this study below). It’s high time our federal government stop using taxpayer dollars to subsidize the slaughter of America’s wildlife to pander to private interest groups – often on public lands. There are effective non-lethal methods that are more ecologically, economically and ethically defensible, such as those employed by the Marin Livestock and Wildlife Protection Program.

Most people are completely unaware of USDA’s Wildlife Services program and its use of poisons, aerial gunning, traps, and snares to kill tens of thousands of coyotes, bobcats, bears, mountain lions, wolves, foxes, badgers and other native wildlife. That’s why Project Coyote is producing a documentary film, which exposes the workings of this agency, and spotlights non-lethal alternatives, such as those practiced by the Marin Livestock and Wildlife Protection Program – which you’ll be hearing more about soon.

Fortunately, there are two things that you can do today to actively oppose the government-sponsored lethal destruction of America’s wildlife:

1- Submit an online comment to the New York Times about this article here (you must create a free NYT account to submit a comment) and/or a letter to the editor here.

2- Write to the Obama Administration and ask that the President use his last days in office to call on the USDA to stop indiscriminately killing America’s wildlife, and to instead support the use of effective non-lethal methods like those employed in the model Marin Livestock and Wildlife Protection Program. Such methods, including livestock guard dogs, llamas, better fencing, night-corrals, fladry and other techniques are more effective, humane and ecologically sound. You can submit a comment to President Obama here. 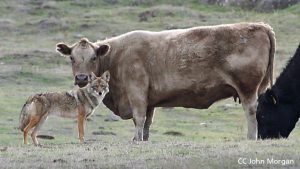 MILL VALLEY, Calif. Sept. 1, 2016 – From their review of the prevailing research into lethal and non-lethal predator control practices in North America and Europe, an international trio of environmental scientists has determined that the science behind the reviewed research is not very scientific. In fact, the authors of the review- titled “Predator Control Should Not be a Shot in the Dark”- call for a moratorium on lethal predator control policies until researchers adopt higher testing standards. The new findings are being hailed by wildlife conservation groups like Project Coyote, which have questioned traditional predator management policies and practices as carried out by the U.S. Department of Agriculture’s Wildlife Services program.

The authors of the peer-reviewed article, which appears in today’s edition of Frontiers in Ecology and the Environment, a journal published by the Ecological Society of America, are Dr. Adrian Treves, a Harvard-trained associate professor at the Nelson Institute for Environmental Studies at the University of Wisconsin, Madison; Dr. Miha Krofel, an assistant professor & wildlife researcher in the Department of Forestry at the University of Ljubljana in Ljubljana, Slovenia; and Jeannine McManus, a graduate student at the School of  Animal Plants and Sciences at the University of the Witwatersrand in Johannesburg, South Africa.

With little rigorous, scientific testing available, farmers and ranchers have historically relied upon taxpayer subsidized lethal predator control programs to protect their livestock. The authors’ research findings show that scientific studies that have proliferated since the 1970s have disproportionately supported lethal methods of predator management. In an effort to systematically evaluate the totality of the scientific research on lethal versus non-lethal predator management, the reviewers screened all of the relevant research – 500 discrete projects in all. Of those, only two experiments met the gold standard for reliability, as defined by the authors of the review. For their assessment, the reviewers adopted the gold standard currently in force for biomedical research, which requires random assignment to treatment and to control groups. This provides a guarantee against bias and increases the opportunity for strong inference - an essential component of good science.

“We expect backlash from those agencies and individuals who benefit from the status quo,” said Adrian Treves, Project Coyote Science Advisory Board Member and lead co-author of the paper. “Independent scientists serve the broad public interest when they scrutinize the science used to promote government policies.”

The authors point out that it is the research they rejected for non-random assignment, poor methods and other design flaws that has been used by government agencies to make lethal management policy.

Wildlife Services reports that across the United States, it spent about $127 million in fiscal year 2014 to kill 2.7 million animals, including 322 wolves.  For decades, wildlife conservationists and scientists have condemned the indiscriminate and lethal approach to predator management as carried out by state wildlife agencies and the USDA WS. However, the agencies have justified their actions by claiming that science supports the killing of hundreds of thousands of predators each year, largely at the behest of ranchers and agribusiness.

“This review shows that state and federal agencies are relying on bad science and bad research to justify their use of lethal predator control programs,” said Camilla Fox, Founder and Executive Director of Project Coyote, a national non-profit organization that aims to reform predator management and promote coexistence between people and native carnivores. “We have just received another piece of evidence that killing predators is unjustified ethically, economically and certainly ecologically.”

Watch a video about the article findings here.